A Wairarapa primary school has become a trailblazer in the creative learning movement after a three-year project led to a shift in its teaching. Douglas Park School in Masterton was the only primary school in the region and one of only about 35 schools nationwide to be selected by the Ministry of Education [MOE] to complete a Teacher-led Innovation Fund [TLIF] project. Beginning in 2018, the TLIF project looked at the concept of ‘maker pedagogy’, a system of teaching that helped students to develop critical and creative thinking skills. Douglas Park School principal Gareth Sinton said the project had confirmed his school’s hunch that including more hands-on components in lessons would aid students’ understanding of the subjects. He said before the introduction of National Standards at the beginning of the 2010 school year, creative elements had been more commonplace in classrooms. “It would have been more common, but maybe not to the skilled degree that we’re seeing the kids at now,” he said. “We’ve got kids who are very capable at 3D design and printing, coding robots, making mini-games from scratch.” “The National Standards era really meant that schools focussed in on reading, writing, and maths, and a lot of the other stuff disappeared,” Sinton said. However, the TLIF project demonstrated that more creative classes could coexist alongside the core subjects of literacy and maths. “Our results are the same now as during the Standards era in terms of reading, writing, and maths, but we would say that we have far richer kids now in terms of their ability as an academic person and as a creative person.” Rather than living solely as consumers – watching TV shows or playing computer games – students could create the world they lived in. “It’s the idea that we can teach kids the return of the number 8 wire mentality, and the idea that we can help our kids bring their ideas to life – entrepreneurship. You don’t just have to buy a thing; you could make your own thing.” Teachers for different year levels had different approaches to implementing creative learning in their classes. Years 0-2 focus on establishing a play-based environment in which students could decide how to use tools for making and creating. In one example, students used popsicle sticks and rubber bands to make a propellor for a Jolly Rogers toy boat. In Years 3 and 4, students built on their play-based learning, expanding their use of creativity to solve problems such as how to strengthen a model whare. In Years 5 and 6, the maker pedagogy was integrated into the school’s literacy programme. Students would use their Chapter Chat reading programme as a launchpad to then design something based on what they had read. “I would love it if all of our kids viewed themselves as content creators,” Sinton said. “That would be a really excellent outcome”. The MOE provided about $70,000 in funding for the project, with the caveat that a report would be presented online for other schools to use as a resource. The findings of Douglas Park’s project were written up in 2020 and formed the basis for the report, called “Developing key competencies and digital capabilities through maker spaces: preparing future capable learners”. • The full report is available at educationcounts.govt.nz. 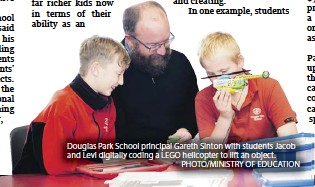