It was a homecoming for Inspector Rob Rutene as he walked onto Te Rangimarie Marae yesterday. Rangitane o Wairarapa and Ngati Kahungunu ki Wairarapa welcomed Rutene onto the marae and into his new role as Wellington District’s Maori Responsiveness Manager [MRM]. The powhiri marked Rutene’s return to the Wellington region and to Wairarapa after being away for 13 years. “I’m just happy to be home,” Rutene said. “I’m working in Wellington, based in Wellington, but I’ll be over here regularly. I want to be part of the community again – because when you go away, things change a little bit. It’s just good to be home.” Rutene started his career in Masterton in 1996 after Maori police officers he played rugby with convinced him to attend an information seminar. While working the beat in Masterton, Rutene soon realised his passion for working alongside Maori communities. From 2001, he delivered a drug education programme within kura kaupapa Maori [Maori language immersion schools] across the Wellington District, which enhanced his knowledge of Te Ao Maori, the Maori worldview. For seven years after that, he worked as an iwi liaison coordinator in Wairarapa, followed by six years in Hawke’s Bay. In 2014, Rutene had been pivotal in establishing one of the first Te Pae Oranga Iwi Community panels while based in Gisborne. The panels served as a way for police and iwi to work together to prevent offenders from reoffending. A 2019 evaluation of Te Pae Oranga indicated the success of these panels, showing they reduced harm from reoffending by 22 per cent. For the past two years, Rutene had served as practice leader for Maori responsiveness at the Royal New Zealand Police College [RNZPC]. At yesterday’s powhiri, he joked that the RNZPC had been a good place to pick up a promotion. He would now wear three stars on his epaulette in recognition of his new title. Despite the recognition, Rutene would continue in the theme of his career in his new role as MRM: working together with Maori communities. The role would also involve working alongside Pacific and ethnic communities. The Wellington District which Rutene would cover included 22 police stations, about 900 staff, and an area extending from Wellington City almost up to Eketahuna and including the Chatham Islands. He would take up a guardianship role for the district, working with a long-term goal in mind. “Guardianship is really about ensuring that we do good things, not just for us but for future generations – those who are coming behind us,” Rutene said. Such guardianship involved the movement within police to include more of the values of tikanga Maori [values and customs]. The role had a focus on preparing for the future and any unexpected events it might hold. “Covid is a good example – preparing for another outbreak, perhaps, or another pandemic. Or a disaster like an earthquake.” Many of Rutene’s friends and colleagues spoke at the powhiri, with Rangitane o Wairarapa cultural advisor Mike Kawana leading proceedings. Rutene’s friend Mohi Apou lightened the mood by drawing attention to the fact that four of the speakers came from the same school: Hato Paora. Wellington District Commander Corrie Parnell welcomed Rutene to his team, saying he already enacted positive change within the role. 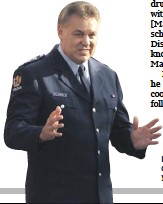 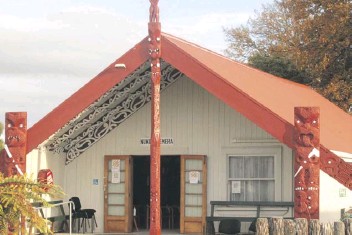 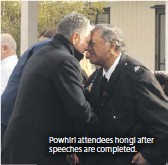