Government on walkway to more congestion

“A downgrade to the upgrade.” That’s the only way to describe the changes made last week to the government’s flagship NZ Upgrade Programme [NZUP]. Critical roading projects such as Mill Rd, extensions to Auckland’s Southern Motorway, Takitimu North Link in Tauranga and Whangarei to Port Marsden were cut back or cut out altogether, with the government citing increased costs and climate change commitments. Meanwhile, massive new investment was channelled to rail, bus, and cycle projects — most notably, a planned cycle bridge over the Waitemata Harbour, at an eye-watering cost of $785 million. It continues a pattern of overpromising and under-delivery on infrastructure by the government and raises a whole lot questions that Aucklanders — and all New Zealanders — need answers to. A big reason the government is now having to try and claw back money from NZUP projects is that it completely underestimated costs at the outset. How did it manage to get its estimates so wrong? Why should we be confident the costings are accurate this time around? Only 18 months ago, these projects were considered critical – now the axe has been taken to them without any consultation. Where is the analysis to justify the decisions? Downsizing South Auckland road projects will have a massive impact on congestion and on our ability to unlock land for affordable housing. Again, where is the supporting analysis? The government claims it’s trying to keep debt down by cutting other projects, but at the same time, it’s proposing to spend nearly $1 billion on a cycleway across the Waitemata Harbour – a project that will only benefit the tiniest proportion of users. And how can it possibly make sense to go to the trouble of building a standalone cycling bridge without adding new public transport [PT-] and general traffic lanes? For limited extra cost [in proportional terms], the extra benefits would be massive. But the biggest concern is the strategy behind all this, which puts its faith in mode shift – that’s to say, getting people out of cars and on to public transport, walking, and cycling – as the best way to manage congestion and reduce transport emissions. If only it were that simple. In terms of distance, 95 per cent of the travel Aucklanders do each year is in private vehicles, versus about five per cent in public transport. The numbers for pedestrians and cyclists are so small they barely register, and fundamentally, the ratio isn’t going to change any time soon. Meanwhile, Auckland is expected to grow by another 260,000 people over the coming decade. What this means is that the volume of mode shift required to make the strategy work is so large it’s just not feasible. Boosting the proportion of people using public transport, walking, and cycling remains a key part of the solution, but there’s no chance of keeping the network moving efficiently without adequately investing to support general traffic and freight at the same time. Auckland Transport’s forecasts show congestion deteriorating significantly over the next decade, and with this latest announcement, things will get a whole lot worse. What the government doesn’t seem to understand is that congestion isn’t just bad for liveability and productivity — it’s bad for emissions. An even more clogged up network means cars spend longer with engines running and more time accelerating from stationary positions, which leads to more emissions. It also means more people abandoning Auckland for centres such as Whangarei and Tauranga. Census data shows this is already happening. When people move from bigger centres, the amount of driving they do goes up, not down. New Zealand’s net emissions will therefore get worse. The biggest gains with emissions reduction are going to come through decarbonisation of the fleet [e.g. through the use of synthetic biofuels and, eventually, a shift to electric vehicles], rather than through mode shift. All of this speaks to the need for action on transport emissions, not just to be urgent, but to be targeted. The government must focus on the areas that deliver the greatest benefit, make decisions based on net impacts, and recognise unintended consequences. It can’t simply pull at every lever available or believe that any action – no matter the cost – can be justified based on climate change alone. – NZME • Barney Irvine is coordinator for the Auckland Business Forum, a group of business organisations formed to advocate greater urgency in planning and delivering the Auckland transport programme. 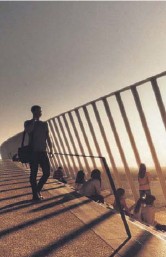