Traffic fee for Wellington back on the table

Transport Minister Michael Wood is open-minded about a congestion charge in Wellington, a significant shift from his predecessor’s position on the issue. The city’s local government leaders have ramped up lobbying for congestion charging since the massive $6.4 billion Let’s Get Wellington Moving (LGWM) transport plan was announced two years ago. The charge was ruled out by former Transport Minister Phil Twyford, who told the Herald in late 2019 there were no plans to introduce it in Wellington. But Wood softened the language around the issue when asked about it after a transport and infrastructure select committee yesterday. The select committee is holding an inquiry into congestion charging in Auckland, after the completion of the Congestion Question project. Wood said the thinking and intent for congestion pricing has been primarily focused on Auckland so far. “So we’ll be awaiting the findings of the select committee before we determine where we take that forward. “But it is notable that the Climate Change Commission has also said that we need to seriously consider congestion charging as part of the toolbox.” He said he would “keep an open mind” about the findings of the committee, including any that would be favourable to implementing a charge in Wellington. Wood said no decisions have been made yet, but acknowledged congestion charging was something that Wellington City has clearly signalled as an area of interest. He stressed congestion charging should not primarily be seen as a revenue-raising tool. “So I think it would be a mistake in the context of Let’s Get Wellington Moving to be leaning on that to fund it. Congestion charging should primarily be seen as a tool to manage our roading network, to de-congest the network, and to get more efficient use out of it.” Wellington Mayor Andy Foster campaigned on seeking a legislative change from the Government for congestion charging as an alternative method to rates for funding LGWM. He said taking away the option of congestion charging in Wellington would be a “literal roadblock”. Greater Wellington Regional Council chairman Daran Ponter is more interested in congestion charging for mode shift. He has previously said he understood Auckland was the Government’s first priority. “We’ve got to start somewhere”, he said. “We’re more than happy for the Government to roll out these types of tools in Auckland first, on the basis that Auckland is a useful trial region for the rest of us and if it works in Auckland, then we can lift and shift.” 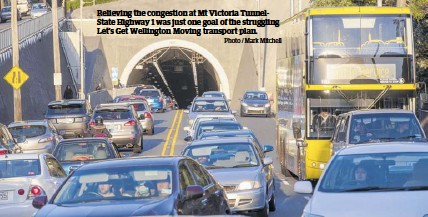