Greytown vs Eketahuna, Greytown, 2.35pm [Alistair Payne]. The opposing coaches are taking different approaches to tomorrow’s Lane Penn Trophy final. Greytown coach Mark Childs is relishing the chance to prepare his team for the season’s biggest game so far and is treating it like a mid-winter final. “I think if you try and treat it like any other game, you’re hiding the fact that it’s a big game,” Childs said. “We’d rather say that it’s a big game, a big occasion, it’s Old Timers’ Day down here, and let’s embrace it, and let’s make it a day that the players from both clubs and their supporters can remember.” On the other side, Eketahuna coach Craig Pepperell is focusing on improvement after what he said was a poor performance in losing to East Coast 14-17 on May 29. “The competition opened up after some of the results two weeks ago — momentum and consistency will be key to keep collecting competition points and making the playoffs,” Pepperell said. He added that the shoddy effort against East Coast should provide the team plenty of reason to turn on a top performance. Greytown are without impressive openside flanker Rihi Brown due to injury, while Eketahuna will miss outside back Matt Raleigh and loose forward BJ Campbell. As for the coaches’ expectations, Childs said he’s never overconfident as he feels any team in the competition can knock over any other side on the day. “We must have players’ attitudes on the money and have them focussed on the game plan the coaches set. If we can play our game and execute what we want to execute, we’ll have a good chance of winning.” Pepperell predicted a challenging encounter against the competition frontrunners. “They are strong right across the park and can play with pace and width. They too have had some injury issues, but I expect them to bring pace and accuracy to the game this weekend, especially as it’s their club day.” COGGIE’S PREDICTION: Greytown have been unstoppable in their ve games this season, but nals rugby brings its di erent pressures. Whichever team handles that the best will take home the chocolates. Purely based on home ground advantage, I will pick Greytown but won’t be surprised if the trophy heads north. East Coast vs Carterton, Whareama, 2.35pm [Kaleb Rowlands]. It’s not quite must-win time for Carterton coach Neil Rodger, but he said it’s getting close. Carterton are without a win after two games, and another loss tomorrow would be a body blow to their top-four prospects. East Coast have had one win, and another four or five points tomorrow would put them in the hunt for the top four. Rodger said he would have close to his strongest team for the clash, with only veteran utility back Inia Katia having to pass a fitness test to take his place, most likely at second-five. “We haven’t put a complete performance together yet, but we’re getting better, and we have a lot of potential with the young guys in the team,” Rodger said. “East Coast will be abrasive and tough, and it’s their Old Timers’ Day, but I’m confident.” COGGIE’S PREDICTION: Like all games tomorrow, another tough one to predict. Katia’s likely return from a knee injury will boost Carterton, who are desperate for points. Carterton by the barest of margins. Pioneer vs Gladstone, Jeans St, 2.35pm [Chris Je eries]. Gladstone coach Steve Thompson is keen to build on the momentum from their first win of the season, a 41-3 thumping of Martinborough two weeks ago, but is conscious of the dangers posed by a confident Pioneer. “It was quite convincing in the end, and definitely the guys played well,. But we’ve just got to back it up this week and see whether we’re up for it,” said Thompson. “Hopefully, we can take the sting out of them and move our point of attack away from how they’re playing, but they’ll be pretty hard to combat, and they’ll be a handful.” Thompson will have Wai-bush loose forward Eddie Cranston back to full fitness after straining a hamstring, while utility forward Cameron Dallas, and midfield back Sam Redmayne have recovered from a leg injury. However, winger George Meyer is out with a leg infection. Pioneer are two-fromtwo and will take a massive amount of confidence from their 42-32 defeat of Marist, a victory built around typical Pioneer support play and passion. COGGIE’S PREDICTION: Pioneer’s rst home game of the championship, and there will be a large, boisterous crowd to cheer them on. Pioneer to get up but, again, don’t be surprised if it goes Gladstone’s way. Martinborough vs Marist, Martinborough, 2.35pm [Pete Semmens]. Martinborough will be back close to full strength for what is shaping as a vital game for the 2019 champions, who have dropped their first two championship games. Winger Nathan Hunt and fullback Alex Priest return after missing the embarrassing 3-41 loss to Gladstone, but their prolific centre Tristan Flutey is still doubtful with a niggly shoulder injury. Martinborough coach James Bruce said another six or seven players played the Gladstone game with injuries, which affected their performance, but they had mostly recovered. The team must focus on their game to get back in championship contention, he said. “We’ve been here before, and we just need to sort out our stuff and not worry about other people’s.” Bruce added that Marist bring no surprises. “They’ve got some big forwards, and they like to run. They probably don’t like the dark places — like around the corners of the rucks — as much as the Eketahunas and other teams.” Bruce was also aware of the dangers posed by firstfive Paddy Gluck, whose unpredictability has posed problems for opposition defences. COGGIE’S PREDICTION: Martinborough need the win to get back in the race, while Marist won’t want to slip o the pace with a second loss. Another tight one, but Martinborough to get over the line on their Old Timers’ Day. 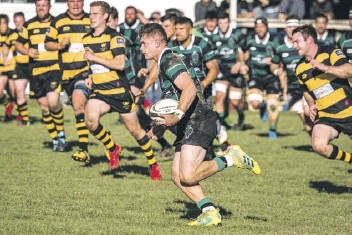